Roam beneath the Eternal City on my Hidden Underground Rome tour. This tour is among my favourites, not least because I get to show people an unknown side to my city. What’s more, explore Hidden Underground Rome with me and you’ll be in the company of an expert, with a PhD in Roman archaeology, who loves nothing more than drilling down into Rome’s fascinating history.

Over the course of three hours, we’ll explore the subterranean levels of the Basilica of San Clemente, the remarkable Catacombs of Domitilla, and, as an optional extra, the macabre ‘Bone Church’ of the Cappuchin Monks. Ready to unleash your inner-explorer? Read on to learn more about this explorative itinerary.

Start your Underground Rome tour in the Basilica of San Clemente

Nowhere is time more present than during a visit to Basilica of San Clemente. Here, just a stone’s throw from the Colosseum, you can journey back centuries by descending below the 12th-century basilica down to the fourth-century church below. 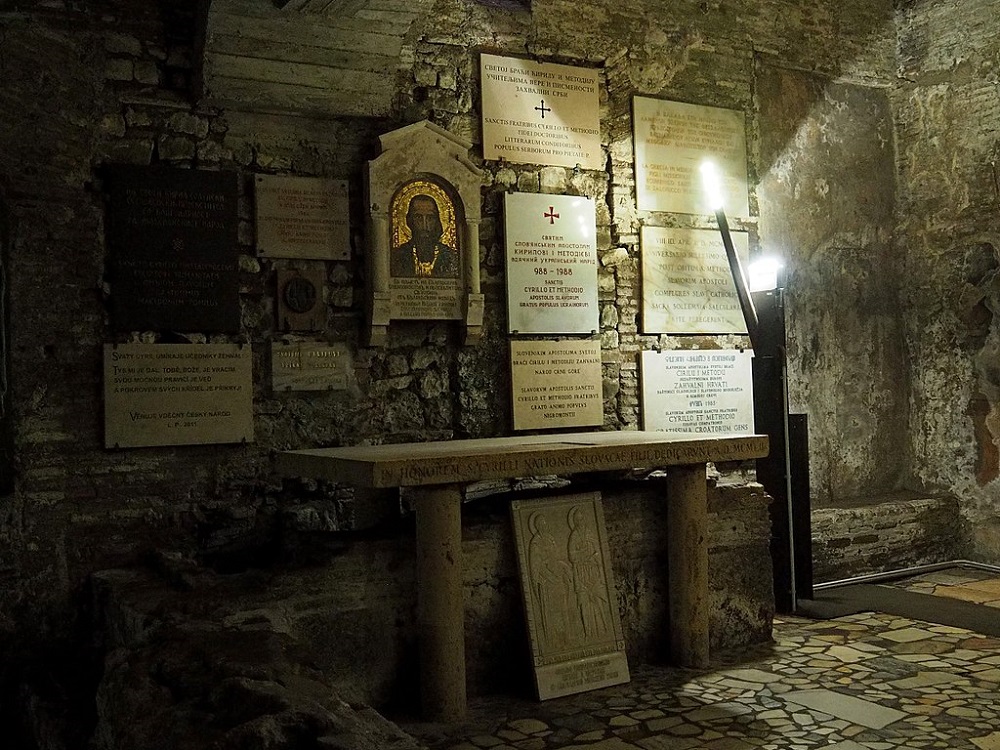 Adorned with fascinating frescoes, immersive inscriptions, this church has to be seen to be believed. Buried beneath the basilica above, it’s an emotive, eerie place, where you can still imagine the lives of the monks to whom it was home. But if this remnant of the Rome of the Popes is captivating, wait until you descend even further to the second-century pagan temple below.

Going even deeper below the church, we’ll come upon the Mithreum, a temple to the enigmatic eastern god Mithras, to whom bloody sacrifices were made on the altar you’ll see before you. After learning all about this mysterious cult, whose influence spread throughout the Roman Empire, we’ll go even deeper to explore the residential foundations dating to the Roman Republic. 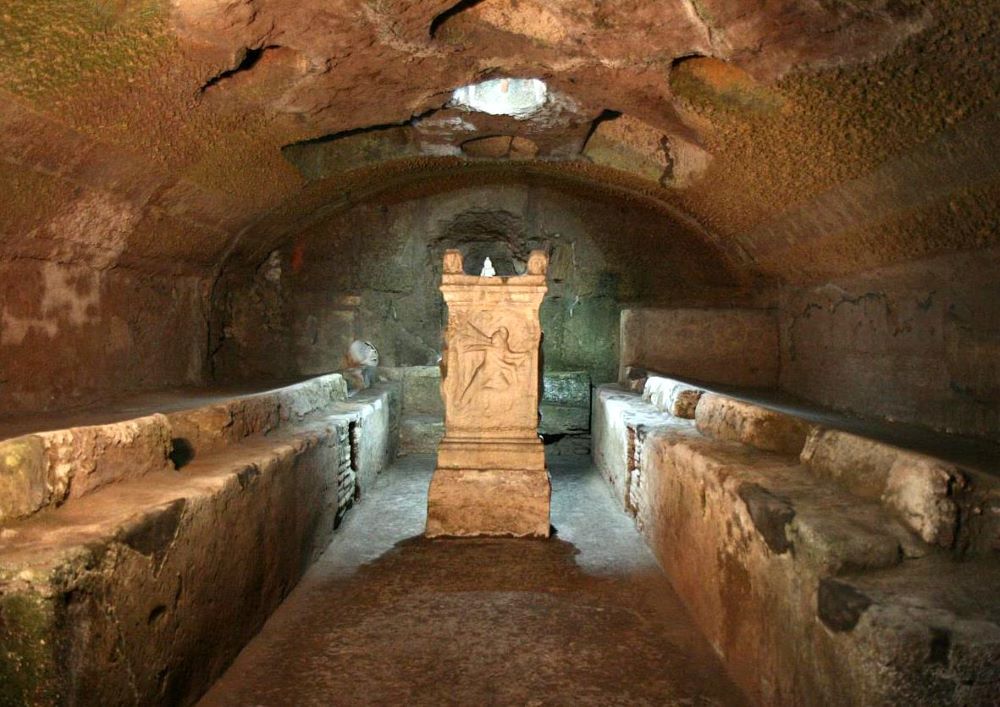 Against the soothing sound of a subterranean river, we’ll fully explore this intriguing area. Before the Great Fire of Rome in 68 AD, this was in all likelihood the home of the city mint. See if you can spot its traces as we explore deep below the medieval basilica.

Continue your Underground Rome tour at the Catacombs of Domitilla

From there, we will venture to the Catacombs of Domitilla, among the oldest in the city and one of the few still containing bones. I have a close, personal connection to these catacombs, having worked here for a few years with a team of Austrian archaeologists. During our studies, we carried out a series of 3D laser scans revealing the enormity of their dimensions. Making me the best places person to guide you through their labyrinthine tunnels! 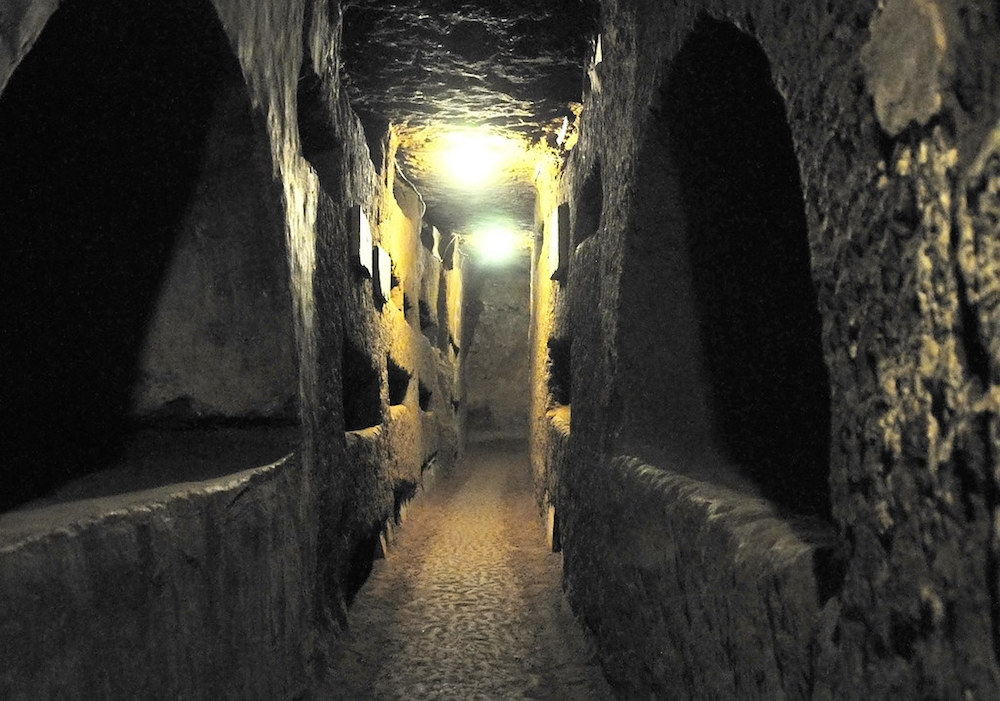 Descending into this first century CE burial site, we’ll walk among the shades of some 150,000 of Rome’s infernal population. Both Christians and pagans were buried here, and each has left us incredible traces in the form of the Hypogeum of the Good Shepherd and the Cemetery of the Aurelian Flavians. Discover the catacombs with me and I’ll show you the highlights.

As an optional extra, we can visit the macabre Bone Church

Should you wish to add an extra site to your Hidden Underground Rome tour, we can visit the Church of the Capuchin Monks, not far from the Basilica of San Clemente. Below the church is a small museum. But the main highlight here is the eerily macabre Bone Crypt. Here, the skeletal remains of 3,700 friars are arranged as a sort of macabre artwork, inviting us to ponder an existential question: “What you are, we once were,” a sign reads. “What we are, you someday will be.”

As with all my tours, my Hidden Underground Rome tour grants skip-the-line entrance to all sites, allowing you to discover the Eternal City without any of the usual hassle. So get in touch with me now and let’s start exploring!